The YoyoFactory Nine Dragons are the most unusual yoyo I’ve ever seen on the yoyo market as it presents the features that I have never seen being implemented in the manufacturing of this skill toy until now.

The weight, shape and the bearing system is one of the silliest ever! Not because it doesn’t work but because of the strange things that you can make with this kind of yoyos.

First, of all, let’s have a look at the intriguing specs of this Yoyofactory yoyo!

Structure and design-what aspect raised my interest in the yoyo?

The main design is mainly a v-shape, not that kind of unique. What is the most unusual: the structure -it doesn’t look like any regular yoyo, just having a fixed aluminium body and maybe some rim weight.

In fact, it presents two plastic or Delrin spinning shells that move independently from the cup-shaped hub stacks.

Yeah, it is that weird and cool at the same time! The two spinning shells can rotate even if the other cups don’t and vice-versa. That opens you new possibilities for trying out new fancy tricks.

The Yoyofactory Nine Dragons don’t have just one bearing-it has 3 of them! You heard that right, two bearings are made for the plastic caps/shell (they sit in the middle /centre to them) and the last one is the regular bearing in the centre ridge of the yoyo.

When you desire to take apart the yoyo, it is recommended that you do not do that as Yoyofactory states that this action will void the warranty.

I don’t know exactly why is so, but I suppose that if you strip an axle and you mess up the whole thing, it is your own fault. So do it cautiously and press the palms against the sides of the yoyo and try to dismantle the yoyo as you would normally do.

Another interesting feature about the yoyo is the fact that spacers are also being used between the bearings located in the middle of the wide shell and the main bearing itself.

As for the central bearing, I would have prefered a concave or at least CBC  Center Trac bearing, but the flat one just works fine, even though it seems that the yoyo sleeps a bit too short for such a heavy toy(82 grams -just insane!).

The first thing that you notice about the yoyo is that it makes extremely loud sounds for a yoyo as there is slight friction between the metal side (aluminium or steel) and the plastic cover/shell/, however, you may call it.

It is understandable from the point of view of the moving parts involved in the movement of the yoyo(just imagine how many things move within the 3 bearings and along with the spacers and the outside metal disks. 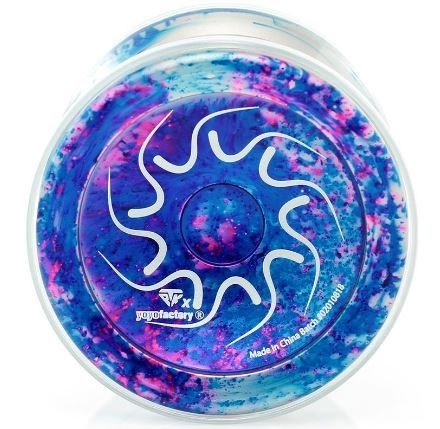 What I particularly enjoy about this yoyo is the fact that it offers you much more freedom and allows you to unleash your creativity with this yoyo.

Just think about how weird and fascinating feels to perform a finger grind or palm grind and have that yoyo still spinning!(the plastic shells stop from spinning but the metal disks don’t)!It is just silly and simply nuts!

You can use its features for taking a break from playing and holding the yoyo in your hand and still keep the metal parts spinning.

Let’s say you want to check the new What’s App messages or FB and Instagram’s feed for some seconds. Maybe you want to finish the Candy Crush match or Clash Royale battle(if you still play it).

Just stop from doing tricks, hold your toy in your hand for one minute, watch what you wanted and come back from where you started. Now you’re set!

Maybe not all of you will enjoy these features. Silent yoyos may be your choice. However, I still recommend this yoyo to include in your collection and have fun with it after all! You don’t see a yoyo spinning this weird every day! For its price range, it is definitely worth it. If you want to have this yoyo, just go over here!

Don’t forget to ask any questions or share your thoughts about this yoyo if you have any! I will get back to you soon!