Yoyo Counterweights-What Should You Choose in 2019

Just starting 5A yoyo-ing. Before making any step further you need to have a counterweight to start playing freehand. Here are some of the best options for you in 2019!

These are the first counterweights you should think about to buy they are cheap and durable. In the package, there are included two dices, one yellow and one red which weigh about 10 grams and there is another round counterweight which is 12.7 grams.

Counterweights, in general, should be one-sixth or one-seventh of the yoyo weight.

I’ve heard that some people prefer one eighth or one-ninth of the yoyo mass, but that is just the exception.

If we divide the weight of the yoyo which is around 60 to 70 grams and divide it by 6 or 7 we obtain a number close to 12 grams.

In this case, the counterweights have sufficient mass to satisfy the ratio between the yoyo weight and the dice’s weight, so you’re good to go with any of these freehand yoyos!

The main advantage of the package is that is cheap and the counterweights are durable and long-lasting as you’ll hit them to the yoyo many times as you are practising.

The Delrin Counterweight Made by YoyoTricks.com along with the 5A Champion Jake Elliot is one of the most innovative counterweights on the market! Why? Because it has something that no other counterweight has: a bearing. You heard that right.

The main purpose of the bearing is to hold a small cylinder in it through which the string passes. The main idea behind this concept is to help 5A players to adjust their string tension seamlessly, unlike the other yoyo players who use normal counterweights.

The string untwists itself with little friction so the tension naturally adjusts as you play. You don’t need to worry any more about messy string because of so much play.

Another important aspect is that the Delrin Ultraweight is machined and not injection moulded, which gives the yoyo counterweight durability in any circumstances.

The Ultraweight has curved edges and corners to reduce the pain you have in case you hit yourself with the counterweight. This is perfect when you perform fast-moving tricks which involve the rapid movement of the counterweight.

The Ultraweight as it is called weighs around 11 grams which are perfect for any yoyo. 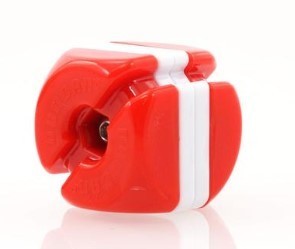 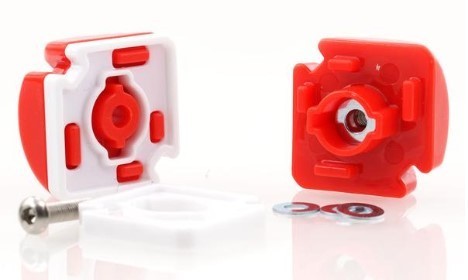 You can adjust the counterweight to have no white plastic pieces, one white piece or two depending on your taste. You can also put metal circles like those on the bottom-right corner and put on the red half with the designated space. 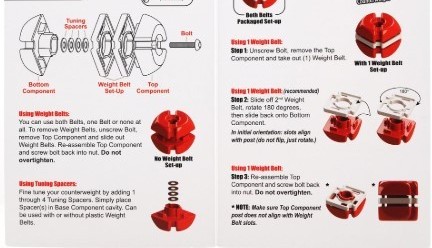 The image is not so clear as you might expect but you can look closer at the image on the top-left to make an impression of the counterweight structure.

If you are reading from the phone and can’t see the image clearly, I will explain to you what you should do.

The tuning spacers can be used with or without weight belts. You can put up to 4 tuning spacers in the Base Component Cavity. Then tighten the two red halves, but don’t exaggerate.

You just remove the bolt and then the top component. After that, you remove one weight belt

In the initial orientation, the slots aline with the red posts. You take out the weight belt and rotate it 180 degrees so that the rectangular holes in the white belt don’t align with the red parallelepipeds.

One weight belt weighs around 0.75 grams and a tuning spacer 0.1 grams for adjusting your yoyo counterweight from 9 grams to 11 grams to fit any yoyo of any size and weight. I like this adjustment feature and I am sure you will too.

I think this is the most simple and the most efficient yoyo counterweight because it has a round shape and it won’t hurt as much when you hit yourself with it. Additionally, it is far cheaper than the rest of the counterweights presented. 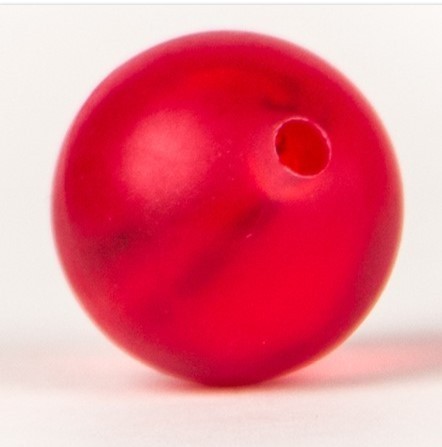 It has a similar design to the YoyoFactory counterweight with the difference that it has a groove in the middle and some strawberry-shaped dimples. This also is a good example of player protection against the harm of a flying counterweight. 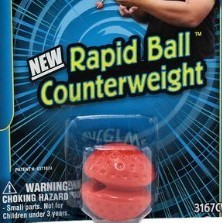 You can do a slipknot on the groove of the yoyo and tighten it and you will be able to switch far easier between 1A and 5A. Rapid Ball also has a hole through which to pass the string and attach to the counterweight of 11 grams.

This model is similar to the Rapid Ball counterweight with the difference that it does no longer have the hole that goes through the plastic sphere-like ultra weight. 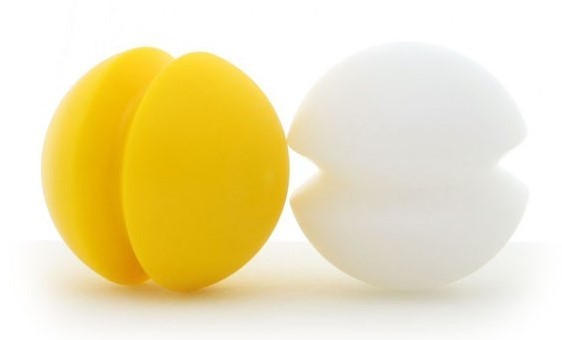 It just has the groove carved into the ball fro switching from one style of play to another(1A to 5A or reverse). This also has a matt finish which feels so comfy into your hands! 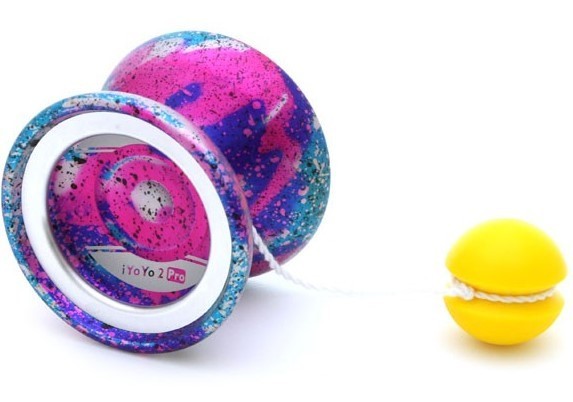 You should try this one out!

These were the most important counterweights to choose from. Every counterweight has its unique characteristics and should be taken into consideration.

How to choose among them?

If you are just starting the counterweights from Duncan(the 2 dices and the ball) should be fine. Want string tension adjustment on the go? The Ultraweight by YoYotricks is for you. Want to suffer less when hit by the counterweight? Just go with the iYoYo or Duncan ball-shaped counterweights.

Want to adjust your yoyo to your taste? Just go with the Delta counterweight! It is worth it! It will work with any freehand yoyo!

Hope you enjoyed reading and if you did, just go to the comments section for giving new suggestions!

YoyoFactory Boss yoyo-You Need To Have One of Those!
How to Make an Unresponsive Yoyo Responsive & Reverse Explained
What wooden yoyo should you choose in 2019
What Freehand Yoyos/5a Yoyos You Can Choose This Year
What is the best yoyo?-Choose your yoyo depending on style
One Drop Terrarian-the yoyo from the game that became reality
How to play with yoyo in 2019
YoyoFactory Shutter Wide Angle-Why It Is Better To buy This One?
Categories: Yoyo recommendations