The Yomega Fireball is one of the most emblematic yoyo models that appeared in the USA in the ’90s and the yoyo boom made a powerful impact on the yoyo spread and the yoyo history. This was especially used in 98′ when the yoyo boom came back. Nowadays, this yoyo is still pretty good for beginners of all ages and I’ll present you the benefits that make the yoyo so special.

Bearing: Plastic spool(that’s why the yoyo is called a transaxle)
Response system: Starburst

Known for quality, performance and innovation, Yomega has been revolutionizing yoyo play since 1984, Ever since the Fireball came on the scene in the early ’90s, the play has advanced beyond what a traditional yoyo could ever allow.

The Yomega Fireball was released five years after the original Yomega Brain yoyo which featured a clutch system allowing an automated return. The Fireball features a Delrin plastic sleeve over the yoyo’s metal axle that holds the yoyo together.

This helped with the response of the yoyo and the friction was reduced. As a result, the yoyo was able to spin three times longer than the fixed axle yoyos, allowing players to complete more tricks.

Yomega Fireball soon became extremely popular for looping especially in the 97′-98′ and was even released in the Hyper Yo-Yo line from Japan. It was also popular for diverse promotions from yoyo players to retailers.

The yoyo was for looping tricks especially when you put looping oil more making clean circle trajectories while practising inside loops. There was also a brown axle that let you upgrade your Fireball from transaxle to ball bearing yoyo.

Even today this yoyo model remains popular, even though other better versions appeared such as the Yomega Raider equipped with a bearing.

The yoyo was designed in the USA and is made from polycarbonate plastic, making the yoyo able to withstand hits to the ground. As mentioned the plastic sleeve reduced the friction between the string and the axle and improved the spin time of the Fireball.

The plastic sleeve appeared before the major spread of the ball-bearing yoyos, so the beginner yoyo with a focus on looping tricks the sides of the yoyo don’t have side cups for fingerspins like other plastic yoyos do. You can still have fun with the Yomega Fireball.

The yoyo presents the starburst system which consists of pl radial ridges made of plastic that help the yoyo come back to your hand.

Due to the innovations implemented in the process of making the yoyo, the Yomega Fireball is able to deliver fast and longer spins. This had remained the standard for the yoyos until the ball bearing yoyos were introduced. This yoyo is especially recommended for beginner and intermediate level players looking for a great looping and string tricks yoyo.

As a result, you are able to do fascinating beginner tricks like “Walk the dog” or “Around the World” with the Yomega yoyo. Not only that, but you can also perform string tricks even though the starburst system is not my favourite one because it is so grippy and snaggy.

There are chances that if you were a kid in the 90’s you may have seen this ad with the guy looping with the Fireball on TV or somewhere else: 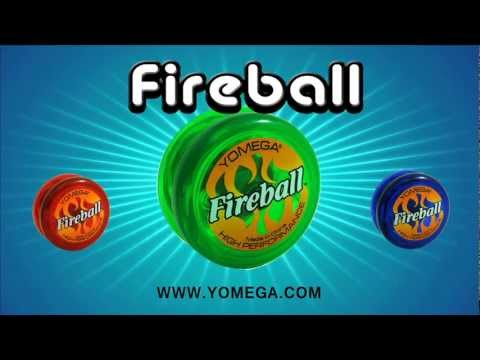 As the yoyo is more suitable for looping, it doesn’t have a shape that favourable for landing the yoyo on the string. You may find out that it is harder to do the “Man on the Flying Trapeze” and other similar tricks with this yoyo. Anyway, for around 12 bucks, it is still a great throw to play with.

To prolong the spin time of the yoyo, it is recommended that some oil is put on the steel axle to reduce the friction between the plastic sleeve and the metal axle.

Overall the yoyo is worth trying out for the low price it sells. It will fascinate children and maybe even adults in their 30’s who want to recall the memories from the yoyo boom in the 1990s. You can get your hands on one of those here.

Duncan Butterfly Yoyo-Why You Should Get It Soon
YoyoFactory Mighty Flea-How it is to play big on a small yoyo?
Best yoyos-what to choose in 2019
Everything You Need to Know About the Best Yoyo Brands
iYoyo Hidra yoyo -the smooth metal yoyo you have to try!
Light-up Yoyo Options to Consider in 2019
Everything you need to know about yoyo lube explained
One Drop Terrarian-the yoyo from the game that became reality
Categories: Yoyo recommendations