The Yomega Brain Yoyo is the perfect yoyo for absolute beginners who are just starting to yoyo and don’t know how to do any trick with it, even the sleeper or the bind. This is the yoyo you can give to your younger brother or sister if you have one or if you are a parent or a grandparent you can offer it to your young son or grandson to have fun with.

See how this yoyo looks and behaves by just looking at the specs!

This Yomega Brain was designed with the absolute beginners in yoyo play in mind. The shape is familiar to the one of the looping(2A) yoyo, having rounded edges, thus making the yoyo very comfortable into your hand.

As the shape is more 2A oriented than 1A, you can’t find any side cups. The most you can see in the laser engraving onto the side of the yoyo and maybe the clutch system which is the  “brain” of the yoyo.

Speaking of the clutch system, it can be said that this was the most original feature ever introduced to a yoyo. Why? Because it represents the auto-return feature which wasn’t present at the time of the release of the Yomega Brain in the ’90s.

The clutch consists of two springs, each holding one white plastic component blocking the axle. When you throw the yoyo, the plastic components are pushed outwards due to the centrifugal force and as they go outwards they also push the springs and compress them, thus releasing the bearing. As a result, the yoyo can spin freely provided that the centrifugal force resulted from spinning outweighs the elastic force of the springs.

When the yoyo slows down, the force of the springs pushes the white components down to the axle locking it. As the bearing is locked the inertia of the yoyo makes the yoyo continue spinning and comes back to your hand.

The axle system consists of the main axle that connects the two halves of the yoyo and the axle sleeve that comes over it. The plastic sleeve presents a circular rubber ring. You have to put the part with the rubber ring into the half with the clutch system for the yoyo to work properly.

The first thing you need to know is that if you already know how to do a good sleeper or to bind, even to do some basic tricks, the yoyo is not for you. The yoyo is designed to help absolute beginners learn how to throw properly a yoyo including small kids. If you are a bit more advanced I recommend you buy a starter yoyo or even one of the best unresponsive yoyos.

You can’t do most string tricks with the Yomega Brain as the clutch makes the yoyo stops in the middle of the tricks, thus annoying you. The most you can do is the picture tricks or maybe some looping tricks.

Before moving further just have some fun watching the ad of Yomega in the ’90s by clicking twice on the image! 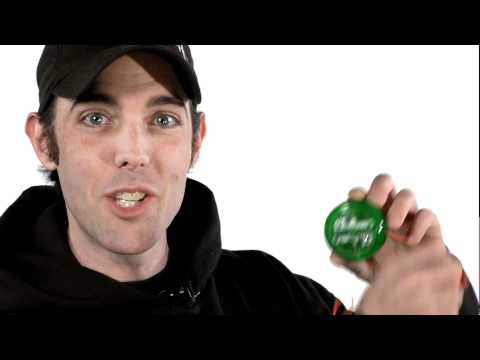 Speaking about 2A, the yoyo can doo looping tricks pretty well, allowing you to perform tricks like around the World or Forward pass, even though it won’t be your ideal throw for such tricks.

I like the fact that you can stop the yoyo from auto-returning by removing the rubber ring which maintains the grip between the plastic sleeve and the clutch system. As a result, you end up having twice as much spin time, and you may be even able to do more string tricks.

Also, don’t forget to lube the metal axle to reduce the friction between the axle and the plastic sleeve. In this case, you can’t ignore the axle as you would do with a ball bearing which can hold for longer unlubed. Make sure to maintain the axle with a medium lube and keep the rubber ring dry as to keep the clutch system functioning.

The Yomega Brain is just a fantastic absolute-beginner yoyo for anybody who is just getting started and knows nothing about the yoyos.

Easy to maintain and easy to play with, this is the starting point for any beginner player who won’t get discouraged if he/she can’t throw a good sleeper because the yoyo will return automatically to their hands.

Just starting yoyoing? You can get it here!

Let me know in the comments about your opinion about this yoyo or just leave your suggestions below!

Recess First Base yoyo-What you need to know about it
How to Make Yoyo String Quickly and on the Cheap
What wooden yoyo should you choose in 2019
Best Yoyo Strings You Absolutely Need to Buy This Year!
Yomega Raider is the looping yoyo you should get in 2019
iPPON Yoyo-The Hybrid Yoyo You Need to Get!
Best Yoyos for Toddlers To Know About in 2019
What Freehand Yoyos/5a Yoyos You Can Choose This Year
Categories: Yoyo recommendations