What wooden yoyo should you choose in 2019

If you want to have a taste of how it is to play with a classic wooden yoyo you can try the following ones presented in the list.

This classic wooden toy is a one-piece yoyo which means that you can’t dismantle it. It has a comfortable shape that fits nicely onto your hand for tricks like the Around the World, Walk the Dog or other stunts.

The yoyo has a balanced feel and is made of lighter weight wood making the toy feel a bit floaty. The colour scheme is pretty.

It stained instead of painted, giving it a special look and a slightly gritty feel. You may be lucky with this yoyo or not depending on how well the yoyo is glued.

This yoyo is a bit harder to make it sleep than a normal steel axle yoyo. This is because of the friction between the wooden axle and the string. A positive aspect of the yoyo is that you can do looping tricks with it for ages. Otherwise, this throw is a good performer for around 10 bucks.

All in all, I would recommend to someone with some yoyo skills, not to every beginner to smash the yoyo onto the ground.

With this yoyo, YoyoFactory managed to create its own unique design of the classic wooden yoyo. This toy is one-piece wood construction, a fixed axle which comes along with cotton string just like in the earlier days of the yoyo. 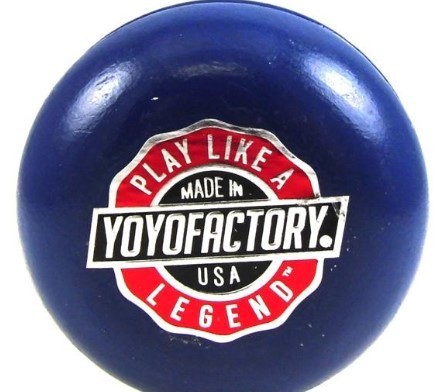 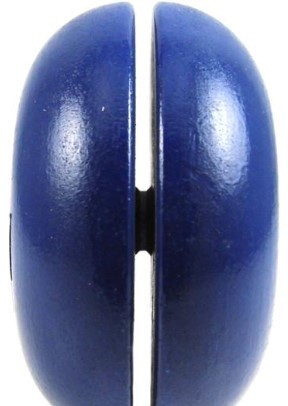 The YYF Legend is full pained and branded with a foil sticker, made in the USA like many collectable yoyos from the 1930s through the 1950s. It is specially designed to bring back your grandpa’s memories about the old days when he used to play with his favourite wooden yoyo.

The Legend Wing is just the right size and weight and the curved butterfly shape makes it really comfortable. Whatever you want to do with it, it can handle it. The gap has been tuned very finely to get just the response when you want it but is not too grabby when you want to try some more daring moves. It also has a really satisfying play feel; just throw some ‘zines and enjoy!

The yoyo is truly high quality and feels well made. It functions amazingly well too! Beauty and greatness in one simple object!

You can buy two such yoyos and hide one of them away for two decades to find out that this yoyo is a valuable collectable yoyo.

This yoyo is a take apart hardwood maple yoyo with laser engravings on the outer cups of the yoyo. Like the original Tom Kuhn design, you can assemble the yoyo in 3 different ways like an Imperial, like a flared Gap yoyo and as a humpback with a side flared gap and the regular way. 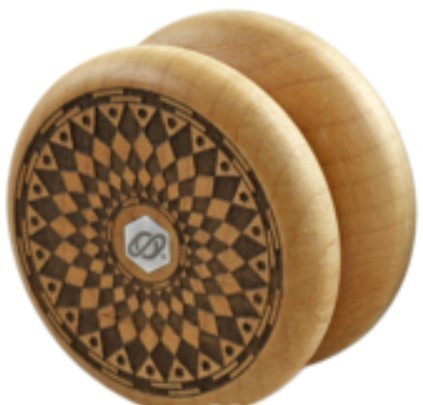 The new Optic star is an improvement on the original version Tom Kuhn doesn’t manufacture any more. The coolest feature of the yoyo is the infinity logo which symbolizes Tom’s endless pursuit of the finest yoyo quality and integrity, It is expected to become a collector’s item over time. This wooden axle yoyo lets you perform your favourite tricks which were done in the 1950s.

Click twice on the video below to watch it below! 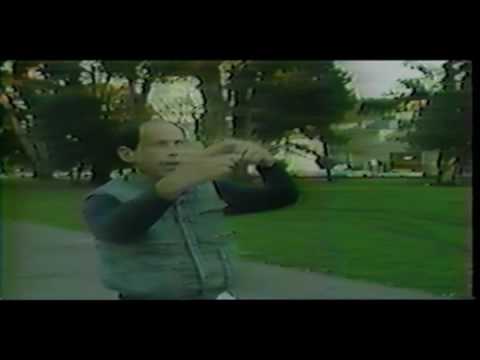 The Tom Kuhn yoyo has been famously called the “Stradivarius of yoyos” and have been displayed in designer stores from Milan to Tokyo to New York. Tom had a major influence on the change and development of yoyo play. He also designed the world’s largest yoyo in 1981 which had to be lifted by a crane to be thrown.and also supplied the yoyo to be used on NASA mission in 1985.

This yoyo model was created by using the new patented BC lamination manufacturing process. The multi-layered lamination gives the yoyo stability and adds extreme weight which makes the yoyo spin longer. The conventional shape makes it perfect for looping. This yoyo is made with a specially crafted wooden axle for extra smooth play.

If you want to have a super responsive wooden yoyo for around 12 bucks. It plays fast and nimble and its response makes 2A play much easier. It is ideal as a starter yoyo, but players of any skill level can enjoy the fast and fun throw.!

The Lightning yoyo is ideal for comfort and style. However, if you want to have longer spin times I would advise you to buy a plastic or aluminium ball bearing yoyo which gives you more freedom to play.

The Duncan Tournament was one of the most famous yoyos in the 3 decades of Duncan dominance starting from the 1930s and finishing in the mid-60s .so much popular has remained over time that even after more than 75 years after its launch people still want to play with it.

That’s why the revived classic Tournament came into place for sale to serve as a new must-have collection model.

The Crossed Flag version was especially loved by yoyoers. The 1955 edition was called the “Super Tournament” and the models that came after were called the “Tournament series”.

This edition comes in a clear display case so you can display it in your collection.You may even get the 1950 Master champion trick book!

TMBR is back bringing two stylish wooden thread axle system yoyo which has a great look. The models in question are the Carlson and the Carlson CS. 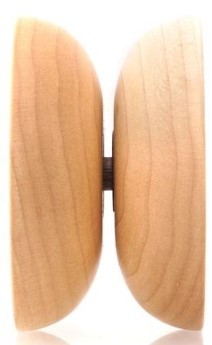 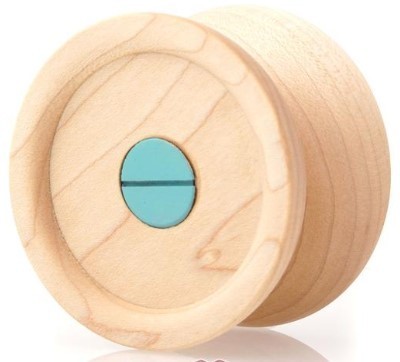 The Carlson CS is comfortable and larger than most wooden models. The yoyo took somewhat longer to be designed, developed and mass produced that any TMBR model and it comes with a series of innovations such as the new style, the rounded profile and the axle caps coloured vividly. The wide profile and the comfy shape is perfect for stalls and regens.

The Carlson CS with yellow caps is way more compact than the original!

The yoyo model was created by a group of brothers, Brent, Jon and Luke who share the passion of wood carving, design and yoyos.

The American  Currier was the first Hildy yoyo released by them and became their starting model. The utilization of various wood types gives it a refined look. 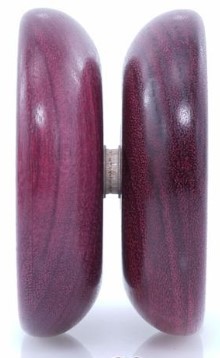 The later models have a new axle system to make the Currier easy to take apart. The top-notch feature is the replaceable Maple axle that plays durable and smooth 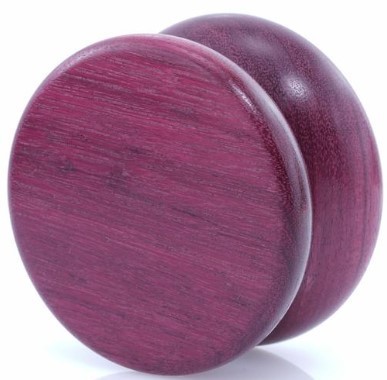 The shape resembles the Duncan Butterfly but it has more weight. It keeps the yoyo stable during stall suicides and laceration tricks.

Watch the video below to see how the yoyo plays! 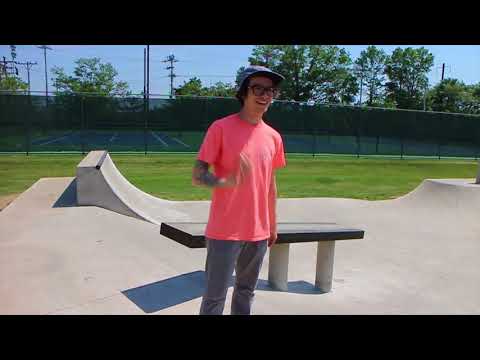 The yoyo can be considered to have almost no flaws for the minor price you play. some claim that the yoyo doesn’t perform that well as the spin time is lower than any of the average fixed axle wooden yoyo.

Others say the yoyo axle might snap and you should replace it with a steel rod that might be a better replacement for the wooden axle.

The yoyo was introduced by the Philippine School of Arts and Trades during the Christmas holiday season in Americ. The event is the earliest use of the term yoyo in the US is referenced in the trademark battle from 1929-1932. 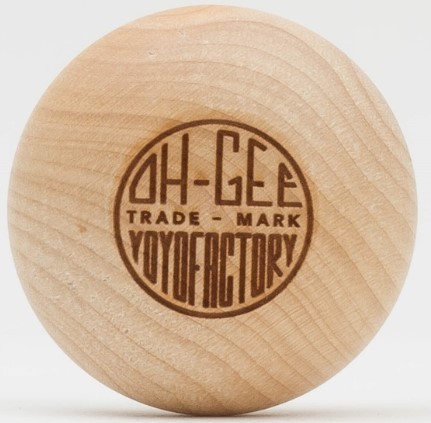 Pedro Flores at that time created the wooden models similar to the ones he used to play within his native Philippines. He also taught the game in the neighbourhood kids in San Francisco and started the mass production of yoyos in LA, California.

The Oh-Gee takes the same shape and specs as the first mass-manufactured wooden yoyo. The material used for the yoyo design is the Canadian Maple which was used in the 1930s as yoyo material. The yoyo design also incorporates laser engraved graphics to ensure lasting appearance a high performance.

These were the most prominent yoyo models made of wood you should choose from. The best one I would say is the Tournament from Duncan and the Oh-gee yoyo.

You need to have this awesome YoyoFactory Wedge yoyo!
How to do yoyo tricks easily
6 Offstring Yoyos You Need to Know About in 2019
iPPON Yoyo-The Hybrid Yoyo You Need to Get!
10 Best Yoyos for Beginners You Need to Choose in 2019
Light-up Yoyo Options to Consider in 2019
Yoyo Glossary:all the terms you need to know about yoyos
YoyoFactory Nine Dragons-what makes it so weird?
Categories: Yoyo recommendations