Vintage yoyos to pick in your collection

In this article, I’ll present you some of the most collectable vintage yoyos you can get for both a decent and later on for an outrageous price. Find out more in the list presented below.

The Duncan Imperial was first released in 1954 and is the most known yoyo from Duncan. It was so popularly that it soon became the best-selling yoyos in history.

The Duncan Imperial is one of the most known yoyos in the world. You may have even played with such a yoyo in your childhood. This toy was first released in 1954 and has been a classic since its inception.

Even though the yoyo is more for collectors children can still play with it. The Imperial features a comfortable shape and is also good for looping tricks and maybe some basic string tricks.

The yoyo may not sleep long as it is a fixed axle, but is still fun to play with, even though it is more suited for collection purposes.

The Duncan Tournament was the second most famous yoyos from Duncan after the imperial and it is still known in the yoyo community as one of the most representative yoyos even after 75 years after its initial launch.

The 1955 Edition yoyo was called the “Super Tournament” and the rest of the models which came afterwards were called Tournament series.

If you are lucky enough you may even get the 1950 Master Champion trick book!

This yoyo model is made of maple yoyo with external laser engravings for a better-looking finish. You can assemble the yoyo in 3 different ways just as you would do with a Tom Kuhn yoyo.

This is expected to become a collector’s item over time as it is less and less produced.This wooden yoyo allow you to perform some tricks if you want to have some fun.

The Tom Kuhn No Jive 3 in 1 yoyo had a major influence in the development of yoyo play and was even sent to a NASA mission in 1985.

The Duncan Butterfly is a cheap yoyo, costing less than 10 bucks and you can find it in almost every Target shop or  Walmart or another online shop. This yoyo is kind of old(60 years since the first iteration made of plastic). You may better find the older versions of the yoyo as the newer ones aren’t as high quality as the old ones(Used to be Made in the USA then Made in China cause why not).

If you get your hands on an older butterfly on sites like eBay or in BSTs groups (less likely though) this will be perfect.

The yoyo has a flared shape, a steel axle and a plastic body. The yoyo may have more chances to break if it is a newer version(less quality).

Duncan Butterfly can perform beginner tricks and some string tricks. Now you may consider it oldy, but the shape was revolutionary in the ’60s as the yoyo had a wider shape than most of the yoyos in that period.

if you just don’t want to keep the yoyo on a shelf you can try to learn some looping tricks on the Butterfly. Have fun!

The Butterfly is fairly responsive and will return to your hand ok. However, it may not be perfect for looping so you need to wrap the loop around the axle one more time and will work wonders.

Duncan O-boy was the first yoyo released after the purchase of the Flores Company by Donald Duncan. The yoyo is similar to the Flores Counterpart meaning that was used in the early production model.

The yoyo presents a slip string, a narrow gap and a logo(not each time). You can watch the video from Ed Haponik to see what you can do on this humble old yoyo. 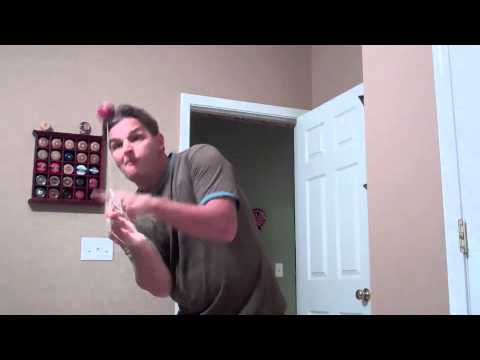 Pedro Flores yoyo is one of the most important pieces of yoyo history as it represents the start of the yoyo boom.

The yoyo was manufactured in Santa Barbara California in 1928. The yoyo is mostly known for the large “F” Flores yoyo with its unique characteristics.

The condition of the yoyo is good, the ink stamp is a bit faded, there are some chips in the wood. These original Flores yoyos are extremely rare and hard to ever find, thus raising the price of the throw at around 750 dollars on YoyoPlay (you heard that right)

Russel Company was founded by Jack Russel, a professional yoyo player and he started to promote yoyos in partnership with Coca-Cola. He created another yoyo craze that swept across the globe in the 1980s.

In that period, Russel demonstrators took the craze to 95 countries and the most prominent trend was in the UK. All yoyos were reflecting the Coca-Cola company and other subdivisions of it like Fanta.

These are the most collected brand of yoyos by yoyo collectors and Coca-Cola memorabilia. The Coca-Cola sponsored yoyos made by Russel starting from the 1960s until the 80-s to 90s.In this time hundreds of models have been produced including brands like Fanta, Sprite and Fresca.

Hi-Ker yoyos were originally made in Canada by Wilfred H Schlee, beginning in the 1930s. In 1946, Wilfred Jr. moved to the United States and began producing Cheerio yoyos for Sam Dubiner, who had acquired that trademark. But when Sam Dubiner sold the Cheerio trademark to Duncan, Schlee Jr went back to making the Hi-Ker yoyo, the brand his father had manufactured in the 1930s.

The Hi-Ker Flat Top yoyo was introduced in the 1950s. All of the Hi-Ker Flat Top yoyos are in unused condition, with what appears to be the original strings. One of the yoyos is scuffed. The box perforation has been halfway pressed through but is still attached. There are some minor tears on the box.

We acquired the Hi-Ker yoyos in the Cheerio box, but we don’t think that they were necessarily ever sold this way. Cheerio and Hi-Ker do have a history that is intertwined though, so we are keeping them together as we found them.

Duncan’s looping yo-yo makes use of its cork braking pads.

The Duncan Bumblebee is another vintage yoyo with unique response system: cork braking pads. The maintenance is almost unnecessary as the brake pads are durable and last for a longer time than the regular response pads.

The Duncan Bumblebee is the re-release of the Turbo Bumble Bee which was initially part of Playmaxx. The company was acquired by Duncan Toys and later on started the manufacturing of the BumbleBees originally produced by Playmaxx. The overall design isn’t so changed.

If you don’t get the Bumblebee of your collection you can at least buy it to learn how to do basic tricks like Rock the Baby, Walk the Dog etc. You can even do some looping tricks with this yoyo and even try more complicated tricks like the cold fusion rewind, etc. If you throw the yoyo sufficiently hard you can make it sleep for around a minute, which may seem a little, but it means a lot for an old yoyo.

Overall, you can get this yoyo for some fun or for adding it to your collection!

those were the collectable yoyos that you can get for a reasonable price. If you want to spend more you can get a piece of yoyo history like the Flores yoyo even though I would doubt that you’d spend 750 dollars on a humble wooden you.

Light-up Yoyo Options to Consider in 2019
What is the best yoyo?-Choose your yoyo depending on style
YoyoFactory Nine Dragons-what makes it so weird?
One Drop Terrarian-the yoyo from the game that became reality
Duncan Butterfly Yoyo-Why You Should Get It Soon
6 Offstring Yoyos You Need to Know About in 2019
YoyoFactory Flight Yoyo -The Best One In Offstring Play!
How to Maintain Your Yoyo by Using Yoyo Replacement Parts
Categories: Yoyo recommendations