One Drop Terrarian-the yoyo from the game that became reality

The One Drop Legendary Terrarian is one of the few yoyos or the only one that was made during the collaboration between a game company and a yoyo manufacturer. The yoyos were introduced to the game several years ago and they were and still are some of the most powerful weapons in the game. In this case, I’m not going to talk about the yoyo in the game but the yoyo you can find in online stores and buy it.

There are some interesting aspects of the yoyo design that resemble certain elements. Before that, I will show you the main specifications of the yoyo:

Axle system: Side Effects(the most original part of the yoyo- you can simply take out the axle and replace it with another one for adjusting the weight distribution and the feel of the yoyo)

The yoyo is made out of 6061 aluminium alloy just like any other yoyo. The W-Shape/wide shape is ideal for intermediate players for landing the yoyo easier onto the string. The surface of the yoyo presents 1-2mm ridges parallel to one another which give the yoyo a unique feel.

The weight is distributed outwards to the rims that give the yoyo enough stability to take you through the most difficult combos. The yoyo shape is similar to the One Drop Benchmark 2016 but it is slightly wider

As I mentioned earlier, the colourways resemble specific landscapes related to the Terraria game. For example, the yellow yoyo from One Drop(see about the company in the yoyo brands list) makes reference to the Desert lands in Terraria and there may be chances that the colourway may represent exactly one part of the desert land.

The 10-ball bearing allows for prolonged spin time and increased smoothness even though I would prefer to have a Center Trac Bearing to avoid the string rubbing the sides of the yoyo and tilting it.

The side cups are perfect for thumb grinds off-axis finger grinds(you have the Side Effects in the middle which prevent you from performing the finger spins in the middle of the yoyo.

Speaking about Side Effects, they are the most innovative thing I’ve ever seen in years. There are several types of Side Effects, some of them flat on the outside or with a cone-shape. This allows you to modify the weight of the yoyo and make it more stable or more floaty. You just pop out the axle half and replace it with another Side Effect.

The wide profile is best suited for intermediate players who want to learn to catch the yoyo on the string far more easier. The weight is more concentrated onto the rims but you won’t feel that the yoyo plays heavy because the toy is wider than most of the other yoyos(the wide yoyos generally feel lighter even though they are 67g or more in weight. 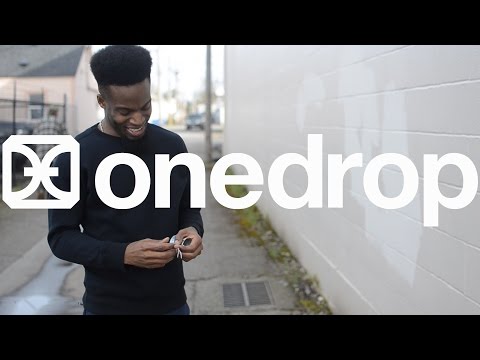 Even though the yoyo doesn’t feel heavy on the string like the Replay Pro, it still has a long spin time allowing you to perform long and complex tricks without the spin dying out too early.

The wide-shape proves incredibly useful for tricks like the whips and slacks especially when you are just getting started to learn them.

The One Drop Terrarian also performs finger grinds pretty well even though the ridges may feel a bit uncomfortable.

The One Drop Terrarian can be the number 1 choice for the Terrraria fans with fancy colourways and other neat aspects like the Side Effects. If you have 80 bucks to spend on this premium yoyo made in the USA just go for it!