Magic Yoyo N8-Pocket-size yoyo you should have

Magic yoyo N8 is one yoyo model from the budget line series from the Magic Yoyo company(see it in the list of yoyo brands).For its low price point which is around 13 dollars the yoyo truly deserves more attention from players like you.! The N8 represents a great start in unresponsive yoyo play!

The yoyo comes especially handy when you want to take it everywhere you go as it is smaller than most of the yoyo on the market. Just have a look at the specs to see what I’m talking about.

The Magic Yoyo Dare to Do N8 is an undersized yoyo similar in dimensions to the YoyoFactory Boss or the YoyoFactory Dv888.In fact, it is smaller than these yoyo models by around  5mm in diameter. The tiny yoyo is so easy to carry everywhere you go that you won’t feel it in your pocket and almost forget about it.

Magic Yoyo (MYY)N8 is made of durable 6061 aluminium alloy and has a V-shape that makes this yoyo a bit easier to catch onto the string. The yoyo may look a bit boxy due to the thick rims that provide stability and spin power.

64 grams may not seem much for a yoyo but in this case, the yoyo is small so it can be considered heavy for the size. This aspect just adds up to the power of throw you get.

The yoyo presents a shiny coloured finish(it can be blue, red or yellow). It also presents to aluminium rings which aren’t painted. However, this isn’t a metal yoyo, the unpainted aluminium rings make the toy look so.

The shiny surface lets you do some finger grinds, but you can’t say that the N8 is excellent at doing those as you also have a little dip near the polished aluminium ring.

The side cups present large thumb grind lips so you can perform those kinds of tricks effortlessly, and the cup lets you do some fingerspins even though you may struggle a bit at the start.

What I like the most about Magic Yoyo is that their models come with concave bearings which centre the string extraordinarily well and prevent the string from rubbing the sides of the yoyo or the response pads.

This kind of bearing is also present in the MYY N8 yoyo and makes a radical change from the initial Center Trac bearing.

The axle of the yoyo half is a bit short, but it can still hold tight the halves of the yoyo response system is medium and the friction stickers do their job which is great.

As I already mentioned you can feel the spin power of the yoyo as it spins freely. An important thing to be noted is that this yoyo is unresponsive, so it won’t come back to your hands when you tug the yoyo. For it to return to your palm you need to perform a trick called the bind.

It might happen that the yoyo has some vibe but that shouldnțt concern you as much because it is almost too slight to be noticed.

See more about how it is to play with the yoyo in the video below: 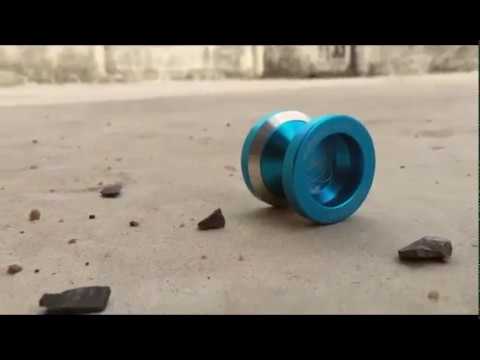 The thumb grinds are easy with this yoyo, the finger spins work as well, the finger grinds may also work for you so all in all you can do almost any trick with the yoyo.

The yoyo generally plays heavy but you can make it play faster if you want.

The Magic Yoyo N8 is one of the best aluminium throws for the price. Honestly, I haven’t found any other manufacturer to make aluminium yoyos at such a ridiculously low price and deliver awesome quality(no machining problems).It worth more buying this yoyo than spending 30 bucks on the YYF Boss or Dv888.

You have to buy this cheap yoyo! You can’t regret anything for 15 bucks or less yoyo!.

19 Cheap Yoyos Under 30 Bucks Available in 2019
Iceberg Yoyo by Iyoyo-The Yoyo That Smashed the Competition!
Magic Yoyo N11-what does a cheap yoyo offer?
10 Best Yoyos for Beginners You Need to Choose in 2019
Yoyo Glossary:all the terms you need to know about yoyos
All you need to know about the YoyoFactory dv-888 presented
How to Maintain Your Yoyo by Using Yoyo Replacement Parts
YoyoFactory Flight Yoyo -The Best One In Offstring Play!
Categories: Yoyo recommendations