How a Yoyo Works Explained in Detail

The yoyo involves more physics than someone would have ever thought. The simple motion made by the yoyo up and down represents one of the most complex toys in terms of phenomenons. Let me present you how a yoyo works when you throw and get it back to your hand.

Basic principles of how the yoyo works

The photo was taken while the yoyo was moving. That’s why it is blurry.

When you let a yoyo go down, gravity affects the center of mass of the yoyo to pull the yoyo downward. The string of the toy is wrapped around the axle and the string is attached to the finger. As a result, the yoyo is forced to rotate as it drops.

The rate of drop increases in time, so the rotation rate of the yoyo. The greatest values are when the bottom of the string is reached and the string is unwound.

A regular wooden yoyo or other beginner yoyo falls harder than a stone attached to a string because the yoyo also has to spin at the same time.

The yoyo has potential energy(from the height you throw the toy), the kinetic energy of movement(from up to down) and rotational kinetic energy(the yoyo spins).

These energies change their values depending on the position and spin of the yoyo(if you tug it or throw it if the yoyo spins or not).

If there was no friction, the yoyo would just climb back at the same level it started from. Unfortunately, this is not the case, so we have:

The yoyos can be thrown horizontally, launched or thrown in other strange directions. The principle is similar, just the kinetic energy results from the hand movement and not from gravity. The kinetic energy is represented by the spin of the yoyo in air.

The yoyo feels unique because it has that specific momentum. Momentum is when a mass is in motion, it measures how much is something in motion. The yoyo has momentum because it has both mass and velocity.

There are two kinds of momentum, just like the motions the yoyo does:

A gyroscope is the perfect example of strange behaviour. You can barely modify the plane of rotation. If you try to tilt it, it will tilt the other direction.

The gyroscope is so stable due to the angular momentum that will be even suspended on a string(the string will hold the gyroscope). This phenomenon illustrates the conservation of angular momentum as the physicists say. That’s why you feel a yoyo strangely stable as you do tricks with it and you still have the yoyo spinning on the same plane.

If the yoyo string is attached securely to the axle, as the old Pedro Flores yoyos, the wooden axle will grip the string and the yoyo will start to wind up. The yoyo will return to the hand. The yoyo player should give a slight tug on the string as the yoyo winds back to the palm for compensating the energy lost for friction.

In modern yoyos, you have bearings that don’t have that much friction as a wooden axle since you only have the interior balls having friction. The ball bearing yoyos don’t return as fast as the wooden yoyos. Just fling harder the wrist and the toy will return to your hand. The tug increases the friction between the string and the axle so the yoyo rewinds and come back up. That is for responsive yoyos. About unresponsive yoyos, I’ll talk a bit later.

This yoyo represented an innovation in the ’90s when it first appeared on the market as it could return to your hands automatically when the yoyo lost too much spin.

The auto-return system just represents a centrifugal clutch. The system consists of two springs and two plastic components, each one attached to a spring.

To make the yoyo spin freely, you need to throw it hard. When you throw the yoyo hard, the spin of the yoyo will create the centrifugal force that will push the plastic components gripping the plastic bearing.

The pieces are pushed outwards by the centrifugal force, thus compressing the springs. The plastic parts don’t grip the bearing anymore like brakes so the yoyo can spin freely. When the yoyo slows down, the springs push back again against the parts holding the bearing.

This makes the white parts to rub against the bearing and to stop the yoyo from spinning at the end of the string. The yoyo won’t stop though. The momentum of the yoyo will transform from rotational momentum to linear momentum,  thus making the toy come back up.

How binds work for an unresponsive yoyo

Unresponsive yoyos are specifically made for not returning to your hand when you fling your wrist and tug the toy. This aspect revolutionized yo-yoing, allowing for more tricks to be done, but also posed a challenge for the first players who had to make the yoyo return the yoyo somehow.

The first ideas of bind were inspired by 4A tricks. The main idea is to whip the string around the axle of the offstring yoyo and the string should wrap around the bearing to create friction and engage the response system.

Just have an idea of it by watching this video by Mr Yoyo Thrower. 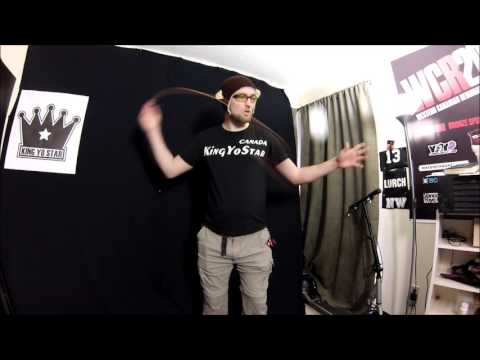 Unfortunately, those didn’t work so well for string tricks yoyos, but the windup principle was still there. The thing that completely changed the return of the yoyo was the string loop.

Let me explain to you:

Let’s say you get in a front mount. You are right-handed and hold the knot on your right middle finger. You have a string loop coming over your non-throw hand pointing finger. When you bind you to feed the loop of string into the bearing. This string wraps around the axle engages the response system and the yoyo winds up.

To be more clear the bearing spins in the same direction as the yoyo. As these things happen. The string rubs the silicone response system

.The silicone pads grab the string more and the yoyo eats up more string. As the yoyo has more string winding up the inertia of the toy will make it climb the string and make it return to the hand.

The yoyos remain one of the most complicated toys in terms of physics as many elements are involved in yoyo play. The already fascinating toy in the 19 hundreds is even cooler now with the clutch system and unresponsive bearings. The yoyos deserve to remain in the hands of children or adults, for play but also for the physics involved.

Top 8 Quality Yoyos For Kids to Get in 2019
Yoyo Jokes to Know About in 2019(complete collection)
Yoyo Champions and Masters you need to know about in 2019
How To Tie A Yoyo String The Easy Way
How to Make Yoyo String Quickly and on the Cheap
Magic Yoyo Stealth-see what cool bimetal yoyo you get!
MagicYoyo T5 Overlord-Add this crazy cheap yoyo to your collection!
How to do yoyo tricks easily
Categories: Yoyo recommendations